EU talking to me? 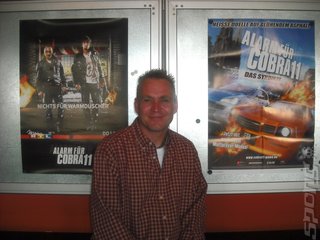 Crash Time developer, German-based Synetic's MD Andreas Leicht has spoken out about the difficulties facing the European games industry today. Specifically in the case of the UK where, apparently, there are already enough development studios.

In an interview with SPOnG, to be published later today, the leader of the eight-man studio - that develops the Crash Time series - explains.

"It's difficult for us to expand our reach fully to overseas markets, because it is quite competitive. Even if I talk to UK publishers, for example, I always hear, "Well, we have enough development studios in the UK, why should we go to Germany??," Leicht said. "I think [Germany] lost the opportunity to make our case globally when we had the chance."

The comments come as Continental studios start to gain some more attention internationally - Leicht points to CryTek and Yager as examples of breakthrough German companies. He admits that it's a far cry from the days of the Amiga, where European developers ruled.

"We are working on it here in Germany though, there's a knowledge-sharing process happening. When I entered the industry back in 1995, you had small development teams who only shared their skills in that group and never spoke to other developers. There was never any kind of forum or incentive for us to talk to one another about what each other does and how we can help each other," Leicht revealed.

"Things are changing now, but they are changing slowly. It's not easy when Europe is divided into so many different countries... I've not really had a deep conversation internally with other developers... Maybe it helps for us to attend game developer conferences like Game Connection and so on, but in Europe those events are only just starting to get popular after about three or five years. GDC in America became famous about 10 years ago in comparison."
Companies: Synetic
People: Andreas Leicht
Games: Crash Time 4: Syndicate