If we die before we wake, at least in heaven we can play Pro Skater. 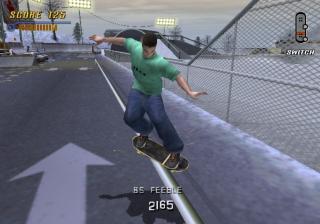 All Images (2) »
Good news! The GameCube version of Tony Hawk Pro Skater 3 is in development. It is just three weeks behind the PlayStation 2 version. This means that it will definitely be ready for the launch of the European GameCube early next year.

Hawk 3 on the Cube will snub the Xbox, which is only getting Hawk 2 1/2, and the PS2 version by offering better graphics with more solid environments.

The PS2 uses a technique called LOD or Level of Detail to reduce strain on the graphics processor. This is where the polygon count of objects in the distance is significantly lowered. As objects move closer to camera the game engine increases the polygon count to make them more detailed and complex. A sensible solution to the problem of game speed.

The Cube version of Hawk 3 doesn?t use polygon reduction since GameCube has enough power to handle complex geometry in the far distance. Add bump-mapping and full scene anti-aliasing and you can imagine how nice this version will be.

However, there is a catch, as the GameCube release will not feature online play. This is a disappointment since the network code could be put in place and activated when connected to a modem. The game's spilt-screen four-player mode is an acceptable alternative.

More on this hot title as it comes in.