Mechs vs Pocket Monsters? There's only one way to find out... 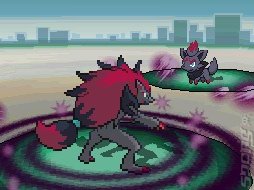 A slew of new releases this week fails to topple Pokemon Black and White from the top of the Japanese Video Game Chart (courtesy Media Create, 4th - 10th October 2010). No, it sits proudly atop the sales table, glaring down all newcomers with a whopping 230,000 units sold. The only game that could get close was a Macross game - go figure.

Yes, it's RPGs, anime games and a combination of both that form a lot of the new entries in the Top 10 this week. Square Enix's Kingdom Hearts spinoff on Nintendo DS hits third place on the chart, while Ken to Mahou to Gakuen Mono 3 enters at #5 and SEGA's K-ON! game clinging on to #10.