3D Realms and T2 at a deadlock. 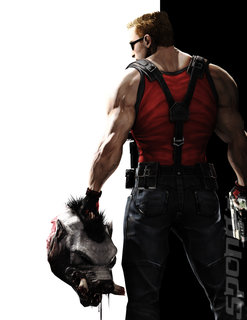 Gearbox Software CEO Randy Pitchford spoke to Duke Nukem fans yesterday about his company picking up development of long, long, long-awaited sequel Forever - explaining that he would never have lived it down if he didn't try to finish the project.

"I owe Duke my career," Pitchford said, referring to his first job in the games industry working at 3D Realms on Duke Nukem 3D. "I was with you guys, I really wanted to see the finished game and have an awesome time. When I heard the game got cancelled last year, I was really heartbroken. The first thing I did was call George [Broussard, 3D Realms director]."

The idea for Gearbox to continue the project, Pitchford revealed, came from the fact that the Borderlands studio contains a lot of ex-3D Realms staff - the executive included. Because of this, the decade-old project was not only a matter of business, it was a personal matter as well.

"It's like watching a car crash happen right in front of you," Pitchford said. "Imagine you're in the car behind and the people in that crash were people you loved and cared about. Imagine if you were a doctor and could so something to help save them. I felt that if we didn't do anything to help Duke at his time of need, that I would regret it for the rest of my life."

Gearbox's close relationship with Take 2 - which own the publishing rights to Duke Nukem Forever - was also a factor. The CEO said that the deadlock between 3D Realms and the publisher meant the project was doomed to limbo.