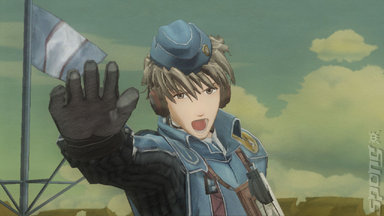 SEGA has revealed more details about the characters from PSP title Valkyria Chronicles 3 in the latest issue of Japanese games magazine Famitsu.

The game takes place in 1935, the same year as the first Valkyria Chronicles in the neutral nation of Galia. Players will command Gallian Army squad 422, referred to as the "Nameless" due to its members being referred to by number only.

The three main characters in the squad are Kurt Irving, an officer who graduated at the top of his class at the Lanseal Royal Military Academy but an unexplained event caused him to be redeployed to the Nameless squad. He endeavours to restore his former honour. Joining him is Riela Marcellis, a descendant of the Valkyria who can wield the lance and shield those of Valkyria heritage are notorious for. She is referred to as the "god of death" as she was the sole survivor of her former squad due to her Valkyria powers and consequently sent to the Nameless squad.

We are also introduced to Imuka, a Darcsen who's village was wiped out by the Valkyria and is out for revenge. Although she is renowned for her ability in battle she is also known to ignore the orders of her superiors. The squad leader of Nameless, Ramsey Kurou, is also detailed as an army man who feels no loyalty to his upper ranks, enjoys alcohol and women but still has renowned ability as battle strategist.

Three of the commanding officers from the unit Calamity Raven, the Antagonists of the game, were also introduced. These include Dahau, the group's leader who desires to separate from the Darcsen race who were believed to have destroyed much of the game's re-imagining of Europe in the past. He is joined by Lydia Agute who is an aide to Dahau but sows no loyalty towards her superior. She also appears to be observing Dahau and Calamity Raven, potentially becoming a double-crosser later in the game. The final member of Calamity Raven to be introduced is Zig, a Darcsen who is an admirer of Dahau who is inexperienced but is valiant and has strong determination.

Valkyria Chronicles 3 is due for release in Japan in January 2011. Expect a Western release not too long after.