Do you smell what THQ is cooking? 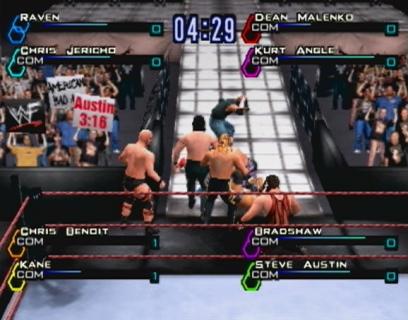 All Images (3) »
When WWF Smackdown was released on the PlayStation it smashed sales record after sales record, it went straight to the top of the charts and refused to move. Surely a testament to the popularity of the game and the World Wrestling Federation brand. The game many of you have been waiting for, the PS2 version of Smackdown will be with us in November.

The original Smackdown was an engaging multi-player game that suffered because of the technical limitations of the ageing PSone. Every time a new character entered the arena, the game would pause for over ten seconds as the data was loaded. Not anymore, the increased memory of the PS2 eliminates the waiting, resulting in a smoother game experience.

Smackdown: Just Bring It boasts several new features; massively improved graphics, sound and artificial intelligence. Even the referee will have a degree of intelligence, getting dragged into arguments and not noticing the interference behind. Just like ?real? wrestling.

Over 35 of your favourite superstars will be represented to compete in over 30 new match types. How does a four-player simultaneous match with five other computer-controlled superstars sound?

Smackdown: Just Bring it could be in with a good chance for the Christmas top slot.