Will be bundled with FlingSmash. 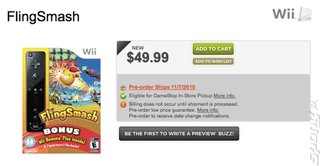 Nintendo has confirmed the existence of a revised Wii Remote that will have built-in MotionPlus technology, after a listing appeared on - and was promptly removed from - US retailer GameStop.

Called the Wii Remote Plus, the new controller will be bundled with copies of upcoming Arkanoid-a-like FlingSmash. The bundle will sell in the US for $49.99, but no details were made available on how much individual Wii Remote Plus controllers would cost - or if Nintendo will sell them separately at all (stranger things have happened).

FlingSmash was originally gunning for a Summer release, but became delayed for reasons unexplained. Seems like we've found the explanation.

When contacted for comment, Nintendo told SPOnG that it would update us as soon as possible on the details, but had "nothing to announce today" regarding the revamped Remote.