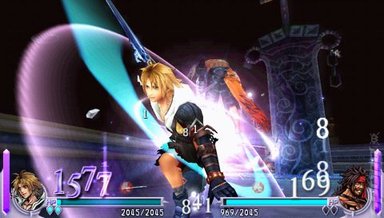 The Latin in the title of the sequel refers to the ‘12th battle’ which is the name of a new war that will be the game's focal point. The game will include an Assist Mode which will allow players to have another player fight beside them in battle as well as additional missions, costumes and gameplay tweaks.

The VP of PAL region brands for Square Enix, Larry Sparks, commented on the upcoming release and said that “Fans demanded it, so we’re delighted to deliver with a follow-up to the smash hit Dissidia Final Fantasy."

"With more characters, missions, costumes and combat features, the world of Dissidia just got a whole lot bigger."

Dissidia 012 [duodecim] Final Fantasy is due for release in Japan in Spring 2011. Are you looking forward to the game's release when it is released in the West next year? Let us know your thoughts in the comments below.
Companies: Square Square Enix