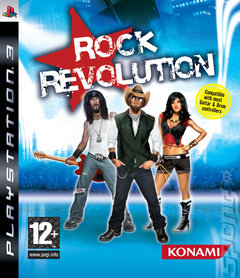 Konami and Harmonix have settled a patent dispute concerning the Bemani/Rock Revolution and Rock Band games, after years of legal back-and-forth.

Filings dated 15th September in a Tyler, Texas federal court reveal that the two companies have agreed to dismiss "all claims and counterclaims" in the lawsuit. No specific terms of the settlement were disclosed.

Originally filed by Konami in 2008, the legal battle concerned patent infringements on both sides related to game music controllers. The fight got so intense that Viacom, which owns Harmonix through MTV, was set to file a hefty countersuit against Konami in a Boston court. That has also, in effect, been dropped.

What does this mean for the two companies and their music game futures? Voice your thoughts in the comments box below.
Companies: Harmonix Konami
Games: Rock Band Rock Revolution