SUDA51 and Shinji Mikami Announce Shadows of the Damned 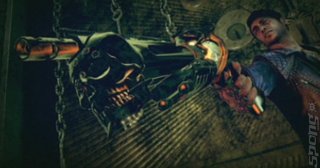 No More Heroes creator SUDA51 has finally lifted the curtain on his collaboration with Resident Evil's Shinji Mikami during EA's Tokyo Game Show conference - a psychological action thriller titled Shadows of the Damned.

Taking a cue from Dante's Inferno, the third-person horror shooter sees the player leading demon hunter Garcia down into hell to rescue the love of his life, Paula. Cue motorbikes, skull-decorated shotguns and chains all over the place.

Of course, the game is directed in the classic punk-rock style that SUDA51 is known for and the trailer shows a fantastically heavy metal themed representation of the underworld, along with a grungy soundtrack from the sound director of the Silent Hill series.

SUDA51 calls it the "greatest game I've ever worked on in my lifetime," and that the reason he and Mikami chose EA Partners to work with is because they felt that it was "absolutely capable of bringing this game to a bigger, global audience."