Similarities between the Gamecube and 3DS make porting possible... if Nintendo is interested 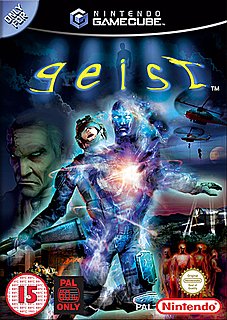 n-Space's creative director, Ted Newman, has revealed that it is "certainly doable" to port Gamecube flop Geist over to the upcoming 3DS handheld - as long as Nintendo is interested.

The developer was speaking with Nintendojo about its work with Activision to develop Goldeneye 007 on the Nintendo DS - a version which the publisher has certainly gone out of its way to be quiet about. On top of explaining how different an experience the handheld game will be compared to the Wii remake, Newman also opined on the power of the 3DS.

"[3DS] is going to be incredible," he added. "Everything I saw at E3, I was completely impressed with. I really can?t think of anything that I thought was a shortcoming."

It wouldn't be difficult to port Geist - a first-person paranormal shooter released during the last few years of the Gamecube's life - to the 3DS because of the "similarities between the systems.

"You know, if Nintendo was interested in getting a Geist game on 3DS, it?s certainly doable," Newman revealed. "As a fan of Geist and as someone who worked on it for three-and-a-half years, I?d love to see it. I love the whole mechanic, and I love that whole universe."

Nintendo, the ball's in your court.
Companies: n-Space
Games: Geist

its taking too long, thanks in advance.

Mike 14 Sep 2010 17:12
4/4
I actually kind of enjoyed geist. I just didnt know anyone else who played it haha. I think they could develope some really cool nintendo 3ds accessories for it.