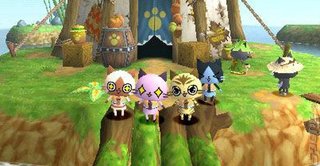 Japan still has a thing for cutesy role playing beat'em ups, as Monster Hunter Diary (featuring cats) remains at the top of the Media Create Software Chart for this week (30th August - 5th September 2010). The release of several new games hasn't stopped this from being something of a slow week for the market however.

The highest new entry this week is Nintendo and Team Ninja's Metroid collaboration, Other M. While critically, the game has had something of a mixed reception, certainly the Japanese pedigree behind Samus' latest has won it some domestic interest. Previous #2, Ace Combat X2, falls to #4 which allows Wii Party to move up a place on the Top 10 board.

Bleach: Hit the Soul 7 debuts at #5, giving the PSP a little new-release love, and Call of Duty: Modern Warfare 2 is finally released this week in Japan, nearly a year after the game's launch in the West. It just about makes the Top 10 ? it's sales are over 9,000. The only other new release this week is a DS puzzle game based on an anime, but it enters the chart at #45.
Companies: Capcom Level 5 Namco Bandai Nintendo SCEJ Square Enix
Games: Art Academy: Learn Painting and Drawing Techniques with Step-by-Step Training Metroid: Other M Modern Warfare 2 Super Mario Galaxy 2 Wii Party