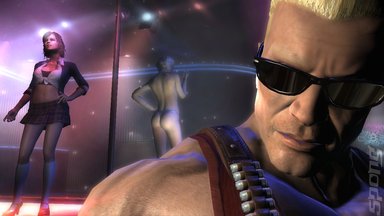 "We're unveiling something BIG at PAX on Friday at 10 AM PT" says 2K Games. That's 6pm for us UK folk. It's heavily, HEAVILY rumoured to be Duke Nukem Forever. You'll be able to find out with the live feed below.

Kotaku and CVG both claim to have development sources who have confirmed the game to be Duke Nukem Forever. Twitter's positively a-buzz with it.

Jon St. John, the voice of Duke has tweeted that he's off to PAX, although the appearances he's mentioned don't coincide with 'BIG' reveal. St. John has also stated, "Sorry Duke fans, but the panel I'm on Friday morning has nothing to do with Mr. Nukem. Thanks for asking!" That said, the panel he's referring to would seem to be the 11:30am appointment which, as we said, doesn't coincide with the 'BIG' one.

It was rumoured last month that Gearbox, the developer of Borderlands, has picked up development on gaming's biggest vapourware title. The studio is said to be picking up where 3D Realms left off, rather than starting from scratch.

The first public showing of gameplay footage from BioShock Infinite is know to be coming out of PAX, but that's scheduled for tomorrow.

Whichever way the big unveiling goes, you can watch it live when it kicks off at 6pm below.

deleted 4 Sep 2010 14:25
1/1
What i never understood with DNF is that with all this hype it will sell 1 gagillion copies so why has no one even rushed a Duke game out?
Posting of new comments is now locked for this page.