Unlucky-in-love salryman gets sent to a nightmare world. 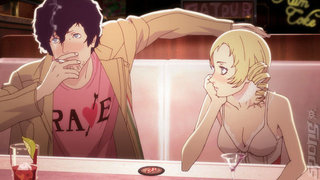 Atlus has announced its first project for high-definition consoles - an action-adventure game titled Catherine. It is being developed by key members of the Persona team, and follows main character Vincent's descent into a nightmarish world after meeting the girl of his dreams, the titular Catherine.

It is being described as an action-adventure game, with dark adult undertones. The nightmares that Vincent experiences are being touted as the key part of Catherine - a place where the unambitious salaryman has to climb to the top of a world of seemingly endless stairs, or risk never waking up.

A number of bipedal lambs are also seen in the reveal screenshots. It appears that these creatures have cursed Vincent, as in the nightmare world he is not only stripped down to his boxers but also sports ram horns. A mysterious voice calls to Vincent, "You lambs have been selected. You will soon die."

Key members of Persona staff working on Catherine include producer and director Katsura Hashino, character designer Shigenori Soejima and sound composer Shouji Meguro. The game is intended to be entirely separate from the Persona series, but there is a tenuous link in that Vincent has appeared in Shin Megami Tensei: Persona 3 Portable!.

Catherine is heading for a release on the Xbox 360 and PlayStation 3. The game's official website is due to open in a couple of days.
Companies: Atlus
Games: Catherine