Resident Evil to be GameCube exclusive 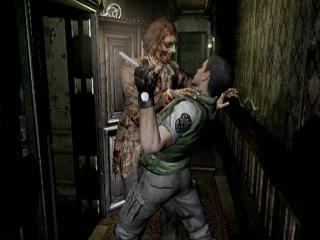 All Images (5) »
At a press conference in Japan, Capcom and Nintendo came together to reveal the future of the brilliant survival horror series.

The entire series will become exclusive to GameCube. The first title will be a remake of Resident Evil 1. Next will be an all new game, tentatively titled Resident Evil Zero. Then Resident Evils 2, 3, 4 and Code Veronica will follow. The GameCube is going to be zombie-tastic!

Capcom explained in great depth why the company has chosen to go with the GameCube. It wants players to only have to buy one system to play the series and also likes the GameCube hardware. Capcom also stated that Nintendo’s third-party relationships were very good.

Miyamoto was quick to praise the series saying that Capcom had created a genre with Resident Evil. Decapitation is quite a turnaround for a company that up until recently would not allow red blood to be displayed in its games.

This is also a great victory for Nintendo. The Resident Evil series is massive and boasts a colossal and loyal global fanbase. While Microsoft is trying desperately to sign up exclusive deals of any magnitude, Nintendo snatches the entire Resident Evil series. We are sure that Sony will not be overly impressed with the news.

The first Resident Evil title for GameCube will be hitting the shelves of Japan on March 22 of next year with all other games from the series to follow throughout 2002.

We will bring you more news as soon as it’s in.