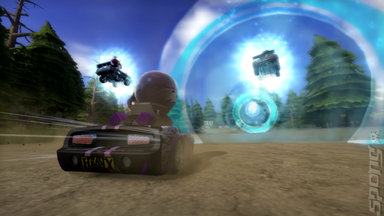 On Wednesday, August 4th at 2:00am in the States - that's 10:00am in the UK - one of the most called-for changes to ModNation Racers will spring into life.

Yes, "Title Update 1.02" brings improvements to the damned loading time of the play,create,share racing game for the PS3. Apparently, "While there are still loads, you will see decreases in load times throughout the game."