It was the different directions in the 1990s that did it. 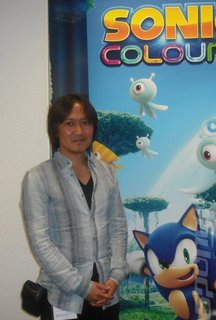 Sonic Colours producer Takashi Iizuka has told SPOnG of the difficulties in appealing to the fragmented Sonic the Hedgehog fanbase.

In an interview due to be published later today, the Sonic Team boss spoke of his experience on the Mega Drive titles Sonic 3 and Sonic & Knuckles, and how the franchise had been heading in multiple directions during the 1990s. The result, as he tries to give the series a unified focus, is a fanbase that has splintered in expectations, depending on their entry to the series.

"There are so many fans, each with their own unique first experience of the Sonic franchise, so I do understand that there are different Sonic fans in the world," Iizuka explained. "It's very hard ? near-impossible, actually ? to please everybody, but I believe that there are some constants in the franchise that we should always try to maintain."

Those consistent themes happen to be Sonic's speed and his devil-may-care attitude - two things that have always been present throughout all of the games, comics and cartoons (well, maybe not speed in Sonic Labyrinth on the Game Gear, actually).

"As long as these things are maintained, and that focus is still there, the team can think of ways to evolve Sonic, while keeping the fundamentals of attitude and speed," Iizuka said. "That's one way I believe we can go some way to pleasing as many Sonic fans as possible."

Some of the ways that Sonic Team has attempted to evolve Sonic can be seen in Colours, where Iizuka revealed that the studio studied previous release Sonic Unleashed for design notes. Either way, it's difficult to second-guess the legion of Sonic fans out there - Sonic Colours hasn't been criticised by the fragmented fanbase nearly as much as the 'back-to-the-90s' sequel, Sonic the Hedgehog 4. What a crazy world we live in, eh?

Check back in with SPOnG for the full Iizuka interview, along with a Wii preview of Sonic Colours.
Companies: SEGA
People: Takeshi Iizuka
Games: Sonic Colours

KieranD 2 Aug 2010 15:42
2/9
He didn't say that Sega fans are 'near impossible to please' at all. What the hell is with that headline?
more comments below our sponsor's message

Grant 2 Aug 2010 15:43
3/9
They keep on about speed. The original Sonic's actually were not really about speed. At least not the speed seen in Sonic Advance where you just hold right. I enjoyed Unleashed actually.

Hi @KieranD we never said "Sega fans are 'near impossible to please'" in the headline, you said that.

Here's our headline: "Sonic Team: Fans are 'Near-Impossible' to Please"

And here's the quote again:

Iizuka wrote:
"There are so many fans, each with their own unique first experience of the Sonic franchise, so I do understand that there are different Sonic fans in the world.

"It's very hard ? near-impossible, actually ? to please everybody, but I believe that there are some constants in the franchise that we should always try to maintain."

Using a headline such as "Sonic Team: Everybody is Near-Impossible to Please" would have been OTT as he was only talking about Sonic - as would "SEGA Fans" have been wrong. So, I reckon that's a perfectly descriptive headline.

Svend Joscelyne 2 Aug 2010 16:21
5/9
KieranD wrote:
He didn't say that Sega fans are 'near impossible to please' at all. What the hell is with that headline?

As Tim said, Iizuka was talking about Sonic the Hedgehog fans. This is detailed in the story itself, as well as the quote. I'm afraid you read your own conclusion from the headline, as the headline doesn't actually say 'Sega fans' at all, nor did it ever say that. It says 'Fans,' which - given the statement is preceded by 'Sonic Team' - is more than appropriate.

EDIT: Oh, and I was there, interviewing him. :) So yeah, he did say that Sonic fans were near-impossible to please.

Ben (Rio) 2 Aug 2010 17:49
7/9
While I can appreciate just how much of a difficult job Iizuka-san has on his hands when playing the role of director for the franchise (lucky SOB,) I personally think that there are more constants for the franchise that need to be brought back and maintained when trying to find this unified direction for the franchise. It's a fantastic idea to pick things up and attempt that, and putting it in the hands of such experience is one of the best decisions Sonic Team has made as a whole. Speed and attitude are definitely the most stripped basics of the Sonic franchise... but the thing that bothers me most about the direction of the franchise is not so much the way that the games play, it's the artistic direction.

I've said this multiple times here and there. You can spend years experimenting with and building on gameplay mechanics and a speed/platforming balance, but if you have Sonic leaping from Greek islands to post-apocolyptic cities to giant hamburgers and lollipops, that kind of whiplash is gonna make people start to feel somewhat detached from Sonic as a whole and that's where I, as one fan among many, am suffering with the franchise right now.

I personally didn't enjoy either side of Sonic Unleashed. The day stages were so fast, they were practically unplayable for me. The night stages were sort of fun but to call it Sonic was just unfathomable. If Sonic Colours has taken the day stages and slowed them down a bit to try and blend the two then I'm definitely interested to give that a try.

But none of that is really my point... my point is I don't mind whether Sonic is blistering through wide landscapes with switching 3D and 2D cameras or is driving cars or riding airboards or is taking on a more trad 3D platforming direction with sectioned areas of speed ala Sonic Adventure/Sonic '06, (my personal favourite type of 3D Sonic game by FAR,) What matters to me most is that he stays in the form of the blue hedgehog I know and love and stays in his home world of lush green checkerboard hills, architechtural wonders, Eggman's crazy ships and fortresses and the odd themed city unless clearly defined otherwise with a story to justify it. If the series is going to take a unified direction then it NEEDS some artistic boundaries.

deleted 2 Aug 2010 19:12
8/9
Well the kids are pretty easy to please, my kids simply need sonic to be in it and they are happy, myself I need it to be on cart running on a 16 bit Sega based console otherwise I couldn't give a s**t any more.

Spinface 3 Aug 2010 09:18
9/9
I don't understand why they're unable to create a 3D game that successfully incorporates speed. Can they not take a lead from open world driving-based games? I appreciate that they don't incorporate platforming, but I can imagine a game that takes the sense of speed you get blasting through the city in Burnout and incorporating more vertical elements and elements of combative play.

Or maybe there's a Sonic game I've missed that took a decent punt at this...
Posting of new comments is now locked for this page.