Schafer: No Brutal Legend 2, But Double Fine Would Love to Self-Publish 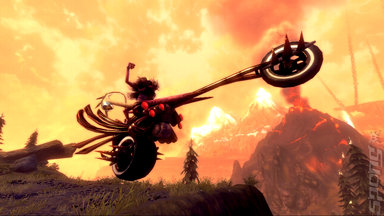 Outspoken Double Fine CEO, Tim Schafer, the man who just yesterday caused a spot of uproar by referring to Activision CEO Bobby Kotick as a "total prick", has said that his company would love to self-publish.

In a keynote at the Develop Conference in Brighton this morning, Schafer confirmed that his company will not be making Brutal Legend 2 and mused on the position Double Fine has found itself in, specifically in relation to larger publishers such as the aforementioned Activision.

Schafer's studio apparently got as far as beginning work on Brutal Legend 2 before being told that it wouldn't be going ahead. "I wasn't prepared for that", Schafer said. The cancellation led Double Fine to diversify and come up with eight smaller games, four of which they took to various publishers.

That experience prompted Schafer to note to the audience that, "you can't burn bridges in this industry. Like on your last day at work you're like 'I'm really happy not to be working for this jerky guy any more'. I'm not mentioning any names. But then when you go and present your games to publishers it's like that theme from The Empire Strikes Back where you walk into the room and you're like 'my god, Darth Vader's at the table.'"

When asked directly if now being a multi-game developer meant he could no longer insult CEOs of major publishers, he laughed and responded that his comments to Eurogamer were a mistake and that he really must remember to keep his mouth shut. He jokingly advised the audience to always check if the mic is on.

So, is Double Fine going to publish its own games? "Yeah, that's been my ambition. Once we get some extra money we'd love to self-publish. Either direct to disc or download only."

He also shared his experience of working with Judas Priest's Rob Halford and Tim Curry. "Everyone told me they were hard to work with," he said. "They're not hard to work with if you come from a creative space. However, what I noticed was as soon as someone from corporate or marketing walked in they just kind of closed up. It was kind of, 'oh, they're the suits.'"

Metalboyx95x 22 Aug 2010 09:26
2/3
the first game is so good how come they dont want two make a second game now this gameinspiredme i want to be a game makernow because of this game but any way this games great you guys should make a part two to BRUTAL LEGEND

gherkin 31 Oct 2010 22:50
3/3
does that mean that there will eventually be a Brutal Legend 2 if Double Fine self-publishes?
Posting of new comments is now locked for this page.