And a dick, and generally bad for the games industry 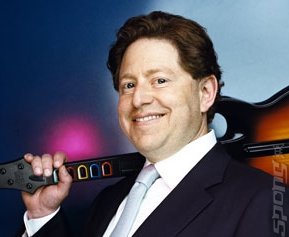 Asked by Eurogamer about his opinion of Kotick, Schafer said, "His obligation is to his shareholders. Well, he doesn't have to be as much of a dick about it, does he? I think there is a way he can do it without being a total prick. It seems like it would be possible. It's not something he's interested in."

You may remember that Vivendi was set to publish Double Fine's last game, Brutal Legend, prior to the publisher's merger with Activision to form Activision-Blizzard. The title was dropped before getting picked up by EA. Acti-Blizz then sued Double Fine, claiming that it still owned the rights to the game. The suit was settled out of court, but you might gather that relations between the two companies are not stellar.

Asked why Kotick should care about how he conducts himself, Scafer responded, "Well, he makes a big deal about not liking games, and I just don't think that attitude is good for games in general. I don't think we're an industry of widgets...

"I don't think he's great for the industry, overall. You can't just latch onto something when it's popular and then squeeze the life out of it and then move on to the next one. You have to at some point create something, build something.

"He could go to an industry that makes more money. Ball bearings... Something that suits his passions more. Weapons manufacturing?"