Most don't know what they want 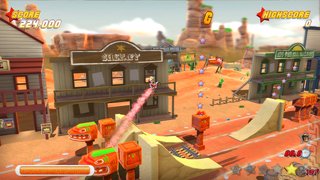 The 2010 Develop conference began today in Brighton with it's Evolve event for mobile, social and smaller publishers. This includes Sean Murray of Joe Danger developer Hello Games, who was damning about the lack of commercial mobility among the bigger publishers.

Speaking to an eager crowd of fellow devs, publishers and press, Murray was scathing about the struggle his company has had to go through when approaching major players such as 2K, SEGA and Atari (to name a few whose names and logos were displayed on the screen behind him).

"We heard some ridiculous things from publishers such as 'Show me one successful motorbike game', we didn't listen to any of that."

Going it alone, however, enabled Hello Games to "break even on day one, sell 50k in the first week... so now we're hiring."

More from Develop as we get it.
Companies: Hello
Games: Joe Danger