Rumours of him being all pissed off overblown, apparently. 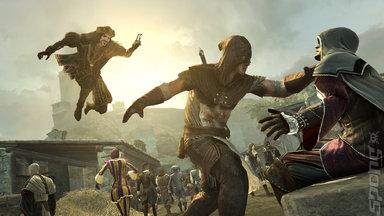 Jean-Francois Boivin, assistant producer on Assassin's Creed: Brotherhood, has cleared up rumours surrounding the departure of creative director Patrice Désilets - the reason he's gone is simply so he can enjoy a nice long break.

Whispers going around the internet had suggested that Désilets took his leave because he was unhappy with making a sequel to Assassin's Creed 2 so soon after the 2009 hit. Boivin said in an interview with GamerZines that this was not the case.

"I totally got where he was coming from because he's been talking about taking a break for a long time," Boivin said. "Right now he's watching the World Cup, and if you were to talk to him he'll say 'Yeah, I'm watching the World Cup, I'm going to the park with my daughter, maybe take a nap or read a book, and yeah, that's it'. That's all he's doing."

Boivin said that he was unsure if the creative director planned to return to the Ubisoft Montreal studio at a later date, or if his leave is considered permanent. Apparently, not even Désilets knows. What they do know is the extent of Désilets' role in Brotherhood, and Boivin revealed that he did not skimp on his duties prior to his leave.

"In regards to Brotherhood, he did everything that he needed to do; he was at the recording sessions, he did the script, he did the casting with me, and he just said 'here's the port, bring it home,'" Boivin said. "All there is to do right now for Brotherhood is to just bring it home."