Bulletstorm looks different to Gears because it wants to. 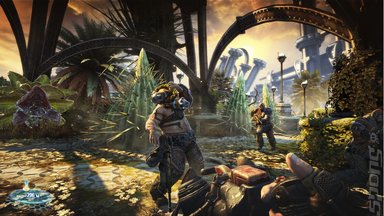 Mark Rein, VP of Epic Games, has revealed something of a pet peeve to SPOnG - the assumption that games using its Unreal Engine is destined to look like Gears of War.

It started with a discussion about Bulletstorm and our noting of how different the game looks to Epic's own chainsaw-wielding, Locust-stomping trilogy. When asked if the style difference was intentional, Rein said, "You know, not really. Nobody said it should look like Gears or shouldn't look like Gears."

"I hear that all the time - 'oh, those Unreal Engine games all look the same.' It's the most ridiculous argument ever. Did you see that Dungeon Defenders game? Really, does that look like Gears of War to you? Does Leisure Suit Larry look like Gears? Does Shadow Complex?"

"People make so many different-looking games with out technology," Rein added. "You know, Borderlands was cel-shaded... it's just such a silly thing. If two games have the same look it's intentional, because two designers have the same feel for what they want their visuals to be like and Bulletstorm, it's just different."

Bulletstorm generated a lot of interest during E3 and the recent Electronic Arts season showcase earlier in the year. The game is being developed by People Can Fly, using - if you hadn't figured it out by now - Epic's Unreal Engine, with the Gears company assuming publishing duties. And Rein only has good things to say about the studio.

"I don't think anyone told them, 'it has to be different'. I think that was just what they wanted to do, and they're a great team."

You can check out Part 2 of our Mark Rein interview in full later today. You can take a peek at Part 1 here.
Companies: Epic Games
People: Mark Rein
Games: Bulletstorm Gears of War 3

Face it, Unreal is only good for Gears, and Gears isn't very innovative. The technology is years behind the Uncharted, Rage, Killzone, Crysis's of the world.

Scott 13 Jul 2010 00:03
2/6
Mass Effect 2 is easily the current best lookingUE3 game. If devs truly use the engine like what Bioware did with ME2 they can make some great looking games. The new Batman looked really good for using the UE3.
more comments below our sponsor's message

Duder 13 Jul 2010 02:47
3/6
@ppTheMart If you ever worked with 3D game engines for a living; you would know just how ignorant, and fan boyish your comment was. The Unreal Engine is a very good engine, and priced awesomely for the Indy game developer. The "They all look the same" argument has to do with not tweaking your default lighting, and making buff in game characters with normal mapping all over the place. It all really comes down to the art direction in the end. Unreal Engine could make a game similar looking to Uncharted or God Of War if a team took the effort to mimic the lighting and character design. Anyway Epic is still in production on Unreal Engine 4 so we'll see how it stacks up to the new Crisis and Rage engines. In any case, those other companies don't support the Indy crowd like Epic does. So in the long run Unreal Engine will bring the video game industry a wider variety of games.

Shadow 18 Jul 2010 04:35
6/6
Look, is probably the wrong word to use albeit it is probably the most often used by technology critics, I think what people refer to is that anything created with "Unreal Technology" seems to have the same "Feel" to it, some game titles more than others feel more like clones of each other. I will admit recent titles released using UDK/Engine are impressive, those titles however have massive teams and big names behind them. I think it's more question now of what us ordinary mortals can create and if there really is a difference in feel/appeal.
Posting of new comments is now locked for this page.