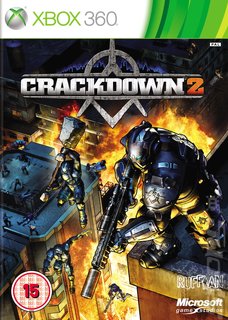 Ruffian Games' Crackdown sequel has gained enough agility to speed past the competition this week in the UK all-format software chart (courtesy GfK Chart-Track), knocking Lego Harry Potter: Years 1-4 off its perch after just two weeks at the top.

Crackdown 2 is Microsoft's very first all-formats #1 win too, according to Chart-Track. Fellow sandbox game Red Dead Redemption falls to #3 this week, with a -23% drop in sales. The big surprise - if one was to be had - is Ubisoft's Dance on Broadway, which leaps from #6 to #4 thanks to a +91% boost in unit sales. Perhaps, not to surprising for those who bore witness to spiritual predecessor Just Dance, which is still clinging on at #9.

Super Mario Galaxy 2 and Tiger Woods PGA Tour 11 are the hardest hit this week, with both games dropping three places to #6 and #7 respectively. Nintendo still gets some representation at #10 with the Pokemon spinoff Pikachu's Adventure, while EA can still claim a mid-chart victory with 2010 FIFA World Cup South Africa. If you're wondering why THQ's UFC 2010 Undisputed has re-entered the Top 10, it's because of some rather successful price promotions.