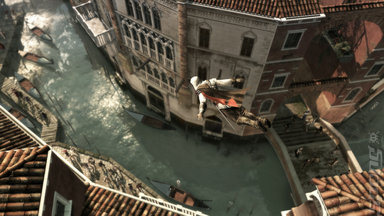 Assassin's Creed: Brotherhood's associate producer, Jean-Francois Boivin, has told SPOnG that the stealth genre "needs to evolve," and that games such as Splinter Cell Conviction are right to have a heavier focus on action-based gameplay over traditional stealth.

During an interview with SPOnG, to be published in full later today, Boivin said that stealth games have gone beyond "slow-paced gameplay where you hide in the shadows," and explained that Assassin's Creed went some way to evolve the genre by introducing what he calls "social stealth."

"I think any genre needs to evolve, or else it dies. That's the impression some people might have with the original stealth game, being slow-paced gameplay where you hide in the shadows," he said.

"I think Splinter Cell Conviction did a really good twist on the stealth genre, where it's more action-stealth. Max [Beland, creative director for Splinter Cell] always likes to use the 'Sexy Panther' analogy ? in that you don't want stealth games to be like a grandmother walking into a room. You want it to be like a panther pouncing on its victim," Boivin added.

"That changed the entire pace of Splinter Cell from a philosophical standpoint. A lot of people thought that was refreshing, and in general it's always healthy to try and put a new twist on something that works well, for the sake of giving the franchise new life. Sometimes it fails miserably, but I think that every so often we can find something really interesting."

Boivin detailed his own plans to expand on the stealth genre with the inclusion of strategy-based 'brotherhood management'. With this, Ezio can recruit NPCs as junior assassins and can send them off on errands to level them up. When they graduate, they can be called on during combat to assist you.

But there was a danger of the new strategy element diluting the core stealth action that Assassin's Creed was known for. "It ended up really being a question of balancing your things well. We did want to make sure that the whole thing didn't become exploitative... so we built missions specifically so that if you do decide to use your assassins, there's a high probability of you losing them in battle."