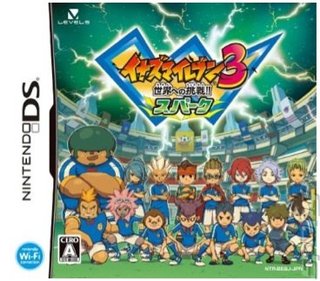 What a difference a week makes. Despite Japanese gamers initially buying Monster Hunter Frontier Online in their absolute droves, the Xbox 360 exclusive couldn't hang on to the Top 10 for longer than its debut week in the Japanese Software Chart (28th June - 4th July 2010, courtesy Media Create). The game languishes at #14 this week.

Instead, the Nintendo DS dominates this week's chart, with the latest Inazuma Eleven game shooting straight for the top of the league. Talk about a goal though – sales of the football adventure game (which the West will soon be seeing, thankfully) hit over 500,000 units. The #2 spot goes to a new iteration of Namco Bandai's drum-striking Taiko no Tatsujin series.

BlazBlue's updated console iterations are performing well too, with the PS3 edition debuting at #3 and the Xbox 360 version just outside of the Top 10 at #11. The only other non-DS titles to grace the chart include Super Mario Galaxy 2 and Konami's World Soccer Winning Eleven (or Pro Evolution Soccer to you and me) on the PS3 and PSP.