Roger Ebert: I Was Wrong to Judge Games

Veteran film critic admits he should have kept schtum 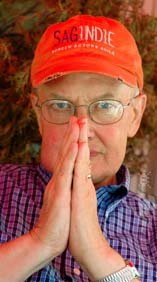 Roger Ebert
Esteemed US film critic Roger Ebert has backed down - tail between his legs - on his recent argument against games as art.

Ebert begins a lengthy blog post by stating, quite simply, "I was a fool for mentioning video games in the first place. I would never express an opinion on a movie I hadn't seen. Yet I declared as an axiom that video games can never be Art. I still believe this, but I should never have said so. Some opinions are best kept to yourself."

Following the original post, titled 'Video games can never be art', 4,549 comments have now been posted. Ebert was told by reader Wayne Hepner, who turned the comments into a text file, "It's more than Anna Karenina, David Copperfield and The Brothers Karamazov."

Ebert noted that "They are mostly intelligent, well-written, and right about one thing in particular:

"I should not have written that entry without being more familiar with the actual experience of video games." That's the crux of it, right there.

Ebert expands by saying, "My error in the first place was to think I could make a convincing argument on purely theoretical grounds. What I was saying is that video games could not in principle be Art. That was a foolish position to take, particularly as it seemed to apply to the entire unseen future of games. This was pointed out to me maybe hundreds of times. How could I disagree? It is quite possible a game could someday be great Art."

Ebert was criticised by some for not responding to the comments, to which he said, "The entry had expressed everything I had to say without going to the extreme of actually playing a game." (Our bolding). Wait, sorry? Playing a game's an extreme when arguing about their merits as art? Seriously?

Following that, you have to agree with Ebert when he says, "I was a fool for mentioning video games in the first place."

Still, hats off to Ebert for 'fessing up that he was wrong to weigh in on games' merit as art in the first place, even if he couldn't be arsed to go so far as actually playing a game...

Feel free to express your anger at Ebert in the comments below. Or, if you're feeling a bit zen you could just take industry veteran Charles Cecil's point of view. He told SPOnG, "I don't care in the least whether people think games are art or not."

We are not here to discus the philosophy of art and I personally think he is trying to look at it from a way too far up his own arse perspective.

As much as any average person can say what is or is not art, in a way that most people can understand and relate to, I think some videogames can now too be considered art.

They are creative, expressive, communicative, beautiful, skilfully and intricately crafted, thought provoking, mentally and emotionally challenging, and on top of all that they incorporate all the elements that make up any other form of creative "art" from classical paintings and sculptures to movies, music and books.

It's not even a discussion.

If you you don't have to pay for it, then it's someone's hobby.

Video games are the first pure artatainment form of the Digital Age. The ones you (or you should) pay for are art. The other ones are hobby.

Paz 2 Jul 2010 10:11
5/6
Videogames can be art in the way that anything can be art if it's done well, provokes thought or emotion, etc. Part of the problem is that there are so many different ways to define art. If one selects a definition and a set of requirements then there are plenty of games that will fulfill those requirements. As a medium however, no, videogames aren't art because they have an intrinsic purpose as products meant for entertainment, not enlightenment.

First...
Paz wrote:
Videogames can be art in the way that anything can be art if it's done well, provokes thought or emotion, etc.

Paz wrote:
I think that saying that something is art just because you love it, or you write about it, or it's your hobby, is pretty pretentious.

I stand my initial premise that art is dead and not worth the debate.

Tim
Posting of new comments is now locked for this page.