So it's actually in development then, Dave. 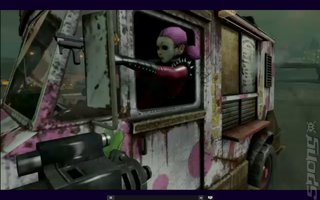 All Images (2) »
Twisted Metal is back! And who thought any different? Well, David Jaffe did when he flat out denied its existence, but then we expected that of him as well. So no surprise there, ultimately.

One thing's for sure, is that the new PlayStation 3 car combat exclusive looks even more mental than its predecessors, with airbourne vehicles being introduced to the series here. You can take advantage of cables on helicopters that can drag your opponents around the arena and wallop them into buildings. Nice.

A new addition to the series, that Jaffe showcased whilst on stage, was a new team-based combat mode. Here, you join a faction, led by one of the original characters in the Twisted Metal franchise. These leaders have their own Wicker Man-esque statue, that must be destroyed by the other faction in order for them to win.

You do this by kidnapping the opposing leader, dragging him/her to a nearby missile launcher and guiding said missile into their own statue. All while your enemies are trying to stop you from doing so and attempting the same against you.

Looks manic and mental. What do you think? We have some pictures, and we'll get hands-on and other media very soon.
Companies: Sony
People: David Jaffe
Games: Twisted Metal