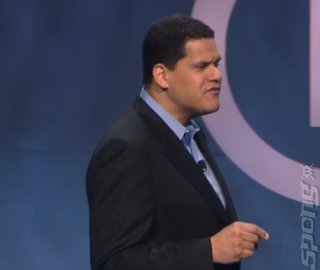 All Images (4) »
At Nintendo's E3 briefing, Nintendo of America president Reggie Fils-Aime has defended the Wii against criticisms that it's in a slump.

Reggie denied that sales have dropped over the last year, going on to state that according to an NPD study Wii owners actually use their consoles more often than owners of any other system. He also denied that owners tend to pick up Wii Sports then leave their Wii under the telly gathering dust, citing "bridge titles" including the 22 million copies of Mario Kart Wii sold to date.

He then announced Wii Party, apparently the next such 'bridge title'. In case the name doesn't give it away, it's a big ol' collection of mini-games. There are 13 areas, including Board Game Island and Balance Boat, with some 70-odd mini-games spread across them. The game includes Mii integration.
Companies: Nintendo