Confused About the Follow-Up to Prince Naseem Boxing? You Will Be?

Heavyweight sequel to feature ear-nibbling rotweiler-type, and this time on GBA. 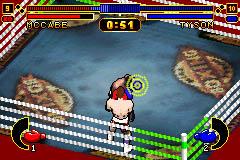 The extra power of the Game Boy Advance allows Virtucraft to produce an even more realistic, visually impressive viewpoint to the game. Animations and background graphics are now far richer and smoother, and the sound effects and speech have been enhanced to make the experience of bone-crunching punches even more realistic.