Balls to the Yanks apparently 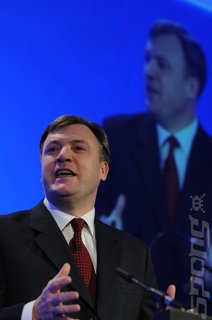 Ed Balls, a gift to the USA?
All Images (2) »
Apparently, EA Sports wishes to send Labour MP Ed Balls to our American pals. Or something like that. A Facebook group purporting to have come from EA Sports and called 'Ballstotheyanks' has arrived. This is either casual racism or good humoured ribbing.

"Get down to Leicester Square in London next Friday to celebrate the England Men?s National Team playing the US in the World Cup for the first time since 1950 (when the Yanks beat the Brits 1-0, although that's not mentioned)

"Take part in a unique live event for EA SPORTS to promote the 2010 FIFA World Cup game and support our team by sending America a message before the big game.

"Turn up on the big day and use the computer onsite to tweet a message to @BallstotheYanks. Your message will be sent to America with other messages that will be printed onto a ball and shot out of a billboard in Universal CityWalk, Los Angeles, USA.

It being a tweet, however, you can also exercise your casual rasicm or mild good humour from home.