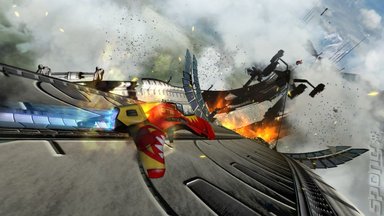 Today sees the release of what Sony calls a "stereoscopic 3D game experiences for PlayStation 3". We're calling it a "a selection of old games given the 3D treatment and costing ?29.99 / Ł23.99 as a download. They are also free... if you buy a 3D Bravia TV.

The games are also available individually. So, what if you already own them? "...those who already own the games can upgrade their games to stereoscopic 3D via a free patch", says SCEE.

SCEE President Andrew House waffled, "PlayStation has always been about outstanding entertainment..." at which point we gave up.

Okay this the full quote: "
The stereoscopic 3D Collection showcases the depth of technology behind PS3 and gives us a feel for the potential for future releases. Stereoscopic 3D technology coupled with the likes of PlayStation®Move motion controller allows us to create an ever more compelling, realistic and immersive experience. Add to that our online capabilities, community interaction features, our film and music services and you?ve got a very exciting proposition for the future of home entertainment.?
Companies: SCEE
People: Andrew House
Games: PAIN Super Stardust HD WipEout HD