No Rare Involvement in New GoldenEye 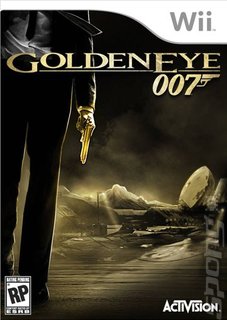 All Images (2) »
Good news: a new GoldenEye may well be in the works. Bad(ish) news: Rare, the developer of the N64 original which still gives older gamers getting a warm, nostalgic feeling in their pants, is not involved.

A leaked survey suggests that a Wii remake of the original the game is indeed in the works, but a Rare representative told CVG, "I can confirm that currently Rare are not working on a new Golden Eye game". Given Microsoft's ownership of Rare it was never too likely, but the company has been known to lease Rare's talents to publishers such as THQ (on Viva Pinata: Pocket Paradise for DS) where it has deemed such a move to create no direct competition.

The survey, sent anonymously to GoNintendo, tells us, "GoldenEye for Nintendo 64 was a game that defined a genre. Now, after 13 years of gaming innovation, the legend is re-imagined. Developed from the ground up for the Wii, GoldenEye takes advantage of the latest technology to deliver the same intense experience with today's graphics and physics.

"Play a modernized version of the classic story with the new Bond (Daniel Craig), more lethal and cunning than ever as you take on missions around the world. Relive all the legendary moments from the original game; St Petersburg, the Caribbean and numerous other levels...

"The enhanced multiplayer experience offers 4 player splitscreen like the original and introduces 8-player online matches. GoldenEye is 13 years better, are you?"

The survey also came with the pack and Klobb peripheral mock-ups you can see in the image gallery.

A CV that turned up last October suggested Eurocom, which made 007: Nightfire, is developing the game. Another hint came from Activision registering the domain GoldenEyeGame.com.

All that said, if you're bored at the prospect of a remake of a 13 year-old game, that's OK. Tell us in the comments.
Companies: Rare
Games: Goldeneye 007