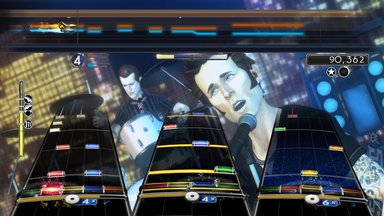 Pre-E3 is often a period where little if anything of note occurs. But this hasn't stopped the hype machine for Green Day: Rock Band going into over-drive.

"It's like a glorified karaoke machine. Or Mortal Kombat with guitars", so says an over-wrought reviewer in feature from the Associated Press' entertainment news? Nope, so says Green Day front-man Billie Joe Armstrong quoted by one John Carucci.

Billy then decides to lay into the Beatles version of the franchise. "As far as video games are concerned it's pretty close (to the way Green Day members move).

"The Beatles wrote some of the greatest songs ever, but it wasn't challenging to get their movement down (on 'Rock Band') because they didn't really move that much."

The whole embarrassing slice of marketing masquerading as journalism finishes with Armstrong making the now-standard admission of the rock star in relationship to the game: "I suck. I'm not very good at it."