Three games will be made 3D-ready, along with a demo of Motostorm Pacific Rift. 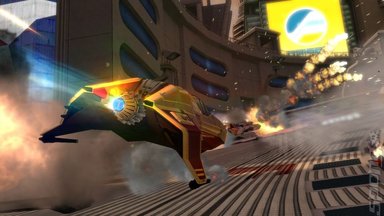 Sony has set a date for its PlayStation 3 update to enable 3D games. The new firmware will be released on the 10th June, and along with it will come patches for three games that will benefit from the new technology - WipEout HD, Super Stardust HD and Pain.

3D updates to both WipEout HD and Super Stardust HD will be free, but according to Andriasang Pain will require a separate Ą300 purchase to unlock the feature in the game. This additional cost is necessary whether you already own the game or make a new purchase.

It has been announced that Sony plans for more 3D-enabled games beyond these PSN titles. A campaign promoting 3D Bravia TVs will offer the above three games for free, and a 3D demo of Motorstorm: Pacific Rift.

As previously reported, this 3D update will apply to games and not Blu-ray movie content. Such functionality is on the way however - Sony states that it will be able to provide 3DBD support by the end of the year.
Companies: Sony
Games: MotorStorm: Pacific Rift PAIN Super Stardust HD WipEout HD