PES also had some problems. 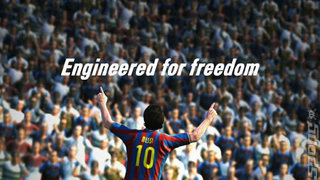 PES 2011 has been given a show-and-tell in Japan. Aside from the standard meaningless guff you'd expect to hear from politicians about 'Freedom' and 'Change', producer Shingo - Seabass - Takatsuka has admitted to some mistakes, and taken a prod at EA Sports' FIFA series.

First on the fact that recent Pro Evos have performed like an England squad in a World Cup run-in, "We're not shy of saying we made our mistakes in the past", says Seabass before following the full and frank admission up with. "but we want to use that to give back double, even triple the expectations of our users today. I think we can do that with PES 2011."

Then, of course there is the competition. EA Sports' FIFA has, in the last few years, over-taken PES has the soccer game of choice among all but the seriously fanboyish. So, what does Seabass make of the competition?

"FIFA is probably simpler because they have the overall gameplay balance just like we used to have - but the basics of football are one-versus-one, the ball carrier versus the defender. So if you really want to go in deep, which we have, I think you'll get a more realistic flavour of this basic football element."

There is more of this type of thing over here.
Companies: Konami
Games: Pro Evolution Soccer 2010

Just read the piece though - really hope it's true although sadly I think creating a truly great PES may be beyond them now.

I think if they focussed only on the 360 and PS3 versions and farmed out the lame handheld conversions to a third party then they might just have a chance. We need a great PES if only to stop EA from becoming complacent (it's already evident with the "progress" made from 2009 >>> 2010 >>> WC2010)

Any chance of an Actua Soccer 4?