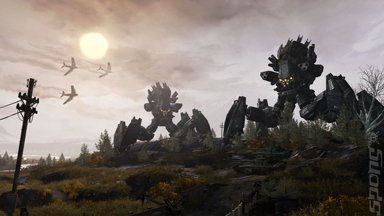 Ratchet & Clank: A Crack in Time and Resistance 2 have two things in common: firstly, they are Sony platform exclusives. Secondly, they both come from Insomniac Games. Well, now Insomniac is going multi-platform with an Electronic Arts deal.

The official word is that Insomniac has chosen to partner with EA, and that both companies, "announced a publishing agreement with independent developer Insomniac Games that will bring the studio?s upcoming, all-new franchise to the PlayStation 3 computer entertainment system and the Xbox 360 videogame and entertainment system.

"This will be the first multiplatform release in Insomniac?s storied 16-year history."

Ted Price, founder and CEO of Insomniac Games said, "Working with EA Partners allows us to extend the reach of our games to a multiplatform audience while retaining ownership of the intellectual property.

"We are excited and eager to introduce Insomniac to a new group of gamers while reinforcing to our loyal fans what makes our games special."

David DeMartini, Senior Vice President and General Manager of EA Partners was also excited when he pointed out that, "Insomniac is renowned for their commitment to quality and their ability to create unique, exciting worlds for gamers to explore. We look forward to help them bring their next blockbuster franchise to the millions of diehard Insomniac fans on PlayStation and the soon to be millions of diehard Insomniac fans on Xbox 360."
Companies: Electronic Arts Insomniac
Games: Ratchet & Clank: A Crack in Time Resistance: Fall of Man