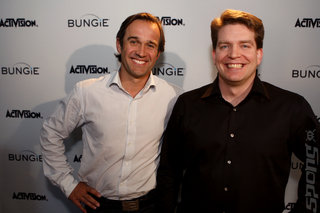 Some stories need little more than a one liner to set the games world alight: "Bungie, the developer of blockbuster game franchises including Halo, Myth and Marathon, and Activision, a wholly owned subsidiary of Activision Blizzard, the #1 online games publisher, announced today that they have entered into an exclusive 10-year partnership to bring Bungie's next big action game universe to market."

That's the straight info right there. However, before beaming off into some Halo fantasy, review the key wording, "Bungie's next big action game universe". Anything else Bungie may work on falls outside the deal.

Here's more of the facts of the matter:

"Under the terms of the agreement, Activision will have exclusive, worldwide rights to publish and distribute all future Bungie games based on the new intellectual property on multiple platforms and devices.

"Bungie remains an independent company and will continue to own their intellectual property. Additional terms of the agreement were not disclosed."

That's the facts. More to come.