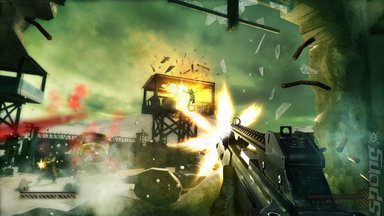 Stuart Black (he of Black and Bodycount) has been rabbiting on to The Guardian about everything under the sun. He has insight into everything game development related. Here are some gems.

On Lady Gaga at Glastonbury, "...from the moment she popped out of her dress at the start, I just thought, wow this is important, this matters this changes? I didn't know what the fuck it changes, but it felt like it changed everything.

"It certainly changed me, changed the way I looked at things ? I just felt really fucking old, and I felt our industry was really old and inward looking and boring."

On the games industry: "It's a young industry, I often talk about this. We're at the point of movies before sound, just at the part where Al Jolson did Jazz Singer, we're certainly nowhere near the point where United Artists formed and created cinema history ? we've still got a way to go to get there. There's a lot of innovation still to come..."

On EA: "EA ? I don't think there's a lot of respect for individuals on teams, the team members are building blocks that they can just mix and match?"

And about Bodycount the game: "there are headlines that I want to achieve, for sure. We don't know how we're going to achieve them, or the order of importance of those headlines. I want to create situations that provoke an emotional response, that's the core of it ? something players haven't felt before, whether that's just the level of intensity they get, the visceral feeling of the firefight, or the feeling of immersion within that, the emotional resonance. All that feeds into who you are as a character, the story, his arc, and therefore you care about that arc. It's all about emotions."

Don't forget to check out the full interview with the ever interesting Keith Stuart.