Also thinks Bobby Kotick should keep it zipped every now and then. 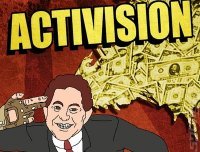 An anti-Activision group on Facebook got more than it bargained for recently when one Dan Amrich, a blogger working for the mega-publisher, spoke candidly about CEO Bobby Kotick, Modern Warfare 2 DLC prices and the Guitar Hero deluge of 2009.

Amrich, who says he is "employed by Activision, technically as a contractor, and I do fall within the realm of PR," began a thread two weeks ago on the "Gamers against Bobby Kotick & Activision" group, offering an open discussion on why gamers seem to hate the company so much.

"I don't agree with everything the company does, yet I don't agree with a lot of the insults and criticisms the company gets either. So the only way around that is to have a discussion," Amrich began. When concerns of 'money-grabbing', exploitation of franchises and the "evilness" of Kotick came to the fore, the self-titled "Major Nelson of Activision" responded with some candid company insight.

On the Modern Warfare 2 DLC, Amrich explains how he thinks the $15 price point was "a mistake; and as soon as I had the opportunity I said so, even came up with some alternate suggestions ("how about $10 for three maps and the two remakes as freebies to thank everybody?") -- but by the time I was made aware, it was too late, and people weren't really asking me that kind of stuff anyway."

He had more to say about the Call of Duty franchise though; "they've confirmed three games in the next two years. Seeing as how there is a pattern of one new COD game every year, this is one new COD game from one new developer, and in a different genre from the core games we've seen. I don't think that's comparable to what happened last year with Guitar Hero, but maybe you see it differently."

Speaking as a gamer, Amrich further commented on the intense milking Activision gave the Guitar Hero franchise last year. "I think people at Activision got overzealous and tried to push too much too fast. I could have handled GH5, DJ Hero, and maybe two other games...but counting the DS games, there was something like eight. Who has that much time and money?" He continued that the company has taken a step back and "returned to normal," with one edition of Guitar Hero and DJ Hero each set for 2010.

Finally, CEO Bobby Kotick took a bit of flak from the company insider for "shooting from the hip so often. I firmly do believe that a lot of what he has said has been willfully misinterpreted, but at the same time, he has to understand that the whole world is listening, not just the people in the banking community that happen to be in the room when he says stuff.

"So I would like to see him choose his words more carefully and give people another facet to his personality beyond just the businessman. His comments at DICE intrigued me and it was nice and human to hear him admit some of his mistakes, but even then, I wasn't thrilled with some of his phrasing, and then the next week the IW thing blew up."

Nice to know that someone inside Activision appears to be listening to concerns made about the company. What do you think? Let us know in the comments box below.
Companies: Activision
People: Bobby Kotick
Games: Guitar Hero 5 Modern Warfare 2

Matt 22 Apr 2010 20:04
1/3
If he feels so bad about it, why not offer the next one discounted to DLC1 customers? Or, better yet, provide rebates in the form of XBL points to those who purchased the DLC?

Tone 22 Apr 2010 20:28
2/3
see this is sort of double sided, activision are arseholes for charging stupid prices, but the peopel who bought it are sort of silly for letting activiion abuse them by paying the price listed!!! activion knew they could do this because people would have paid for it anyway, even with all the whining and bitching. people say activion are arseholes and stuff like but they are a business created to make money, ok they may have ruffled teh fan base a bit but tehy know people are addicted to games COD and wont give up and soon history will repeat itself. people, next time the dlc costs way more than it should, boycotte it and teh price will fall...... maybe :P just play teh waiting game

No_Sir_I_Dont_Like_It 23 Apr 2010 19:13
3/3
Infinity Wards CoD was the only game that I bought from the Activision Catalog. Now that the creative minds behind the series have left IW I don't see myself buying anything else they publish.