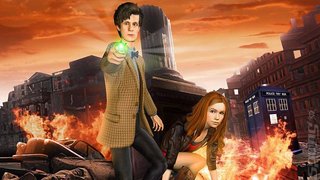 The BBC has announced that the first footage of Doctor Who: The Adventure Series will premier tomorrow.

The footage will be shown after tomorrow's TV episode, Victory of the Daleks. "Why would the first footage of Doctor Who: The Adventure Games be screened after this particular episode? Find out on Saturday night!" the Beeb teases with the subtlety of a flying bus.

The footage will also be posted on the BBC's website, along with more information about the games.

The games, which were announced last week, will be free downloads for PC and Mac, with the first one scheduled for June. While the BBC and developer Sumo have remained tight-lipped about story details, a few have snuck out.
Companies: BBC