No new games in this chart this week, either. 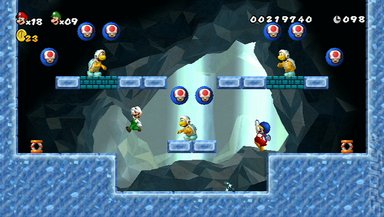 Looks like things in Japan are just as boring as they are in the UK. A lack of new titles means this week's Japanese Software Charts (5th - 11th April 2010, courtesy Media Create) sees an overall sales slump as already-released games shuffle around the Top 10. New Super Mario Bros. Wii clinches the top spot once more while last week's #1, Etrian Odyssey III, plummets to #7 following a colossal sales drop.

Fist of the North Star: Warriors continues to sit comfortably in second position, and it appears that the Japanese public are still very much into the Baseball season with Konami's Pro Yakyuu Spirits 2010 holding 3rd and 4th place for PSP and PS3 versions respectively. Unfortunately, the PS2 version fell out of the Top 10 and is ranked #11 this week.

Taking its place is ? again ? Capcom's budget PSP re-release of Monster Hunter Portable 2nd G. This hardcore party slaying game appears to be the fallback title whenever the Japanese chart suffers a slow week. But we doubt Capcom's complaining. Wii Fit Plus returns to the chart after a brief absence, probably brought on by businesspeople working instead of working out.