In a first person shooter perspective, though. 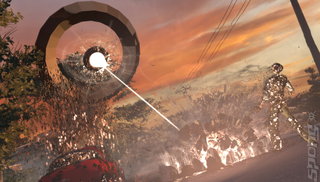 Anybody remember the classic PC series, X-COM? Well, after inheriting the MicroProse franchise back in 2007, Take-Two has announced a first-person "reimagining" that aims to combine the original game's strategic elements with unique FPS mechanics.

First released on Amigas and PCs throughout the 1990s, the XCOM games focused on humanity's struggle against an intelligent alien force. In this new adventure, you play the part of an FBI agent who has to investigate the incoming threat and devise ways of eliminating it. BioShock 2 developer 2K Marin is assuming development duties on the project.

A screenshot was released on 2K's official website, and it's looking very nice indeed. Mmmm, zappage. The UFO looks decidedly 1990s in design - we like.

Quote time! Christoph Hartmann, President of 2K Games, go! "With BioShock 2, the team at 2K Marin proved themselves as masters of first-person, suspenseful storytelling, and with XCOM they will re-imagine and expand the rich lore of this revered franchise. Players will explore the world of XCOM from an immersive new perspective and experience firsthand the fear and tension of this gripping narrative ride."

XCOM is due for release on the Xbox 360 and PC. No release date was announced.
Companies: 2K Marin Microprose
Games: UFO Enemy Unknown