Reboot going back to basic colours. 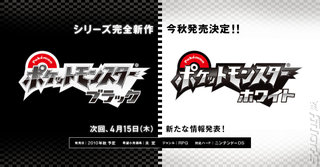 The next Pokťmon titles in the series has been named, thanks to an update on its official website. The two iterations are labelled 'Black' and 'White', and will hit the Nintendo DS this Autumn.

No real information has been revealed as yet, but a full-scale announcement is expected to happen on Japanese kid's TV block Pokťmon Sunday. That'll be on Sunday, obviously. The website also hints at fresh details on the 15th April.

The Pokťmon Company recently announced that this fifth generation of monster-catching games will shake the formula up considerably, with "entirely new" features and brand new Pokťmon. The last generation - Pearl and Diamond - was released back in 2006 in Japan.

The only thing we know about any new creatures is a black fox Pokťmon known as Zorua, along with its monster evolution Zoroark. They're to be the focus of the next upcoming movie, titled Phantom Champion Zoroark.
Companies: Nintendo

Baz 9 Apr 2010 19:12
2/7
"The Pokťmon Company recently announced that this fifth generation of monster-catching games will shake the formula up considerably, with "entirely new" features and brand new Pokťmon. The last generation - Pearl and Diamond - was released back in 2006 in Japan"

Is my dream that Nintendo will stop making the same game over and over again finally coming true?

i can see it now... "Hello this is the bbc 6 o clock news and we seem to have a racial discrimination problem in the new pokemon games, it appears that the legendary pokemon representing the black game is more powerful than the legendary one from the white game"

One legendary pwns the other... except the first gen because it was starters representing games. But look lugia pwned ho oh, kyogre pwned groudon, dialga pwned palkia (this is true because both maxed out dialga always won, roar of time was 1 hit KO and palkia although a little faster spacial rend could not kill dialga in 1 hit unless it was critical but thats down to chance. So statistically Dialga always wins :P) Who wants a dumb pink dragon anyway...

TyphlosionRocks 13 Apr 2010 23:31
5/7
I cant wait! I personally think Darkrai will the be box-pokemon for black and Cressela will be for White. But, considering Darkrai isn't really a legendary and because these are all new pokemon, I'm probably wrong.

blackandwhite 27 Apr 2010 00:01
7/7
anybody know the new legends in black and white
Posting of new comments is now locked for this page.