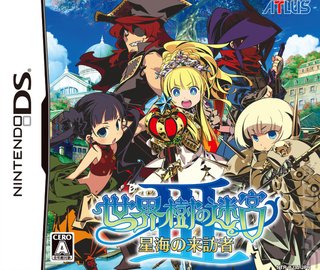 As the seasons change, so too does the weather in computer games. The warm southern seas of Atlus' Etrian Odyssey III gets enough players in a sunny mood to push it to the top of the Japanese Software Charts this week (29th March - 4th April 2010, courtesy Media Create). The traditional dungeon crawler RPG elements most probably help too.

You can tell that it's totally baseball season right now too, as Konami's latest iteration of its Pro Yakyuu Spirits series charts three times. All the Nintendo regulars get shuffled downwards amidst the multiplatform chaos.

The PlayStation 3 and PSP versions of the 2010 edition fare very well in their first week, hitting #3 and #4 respectively. What's surprising is the appearance of the PlayStation 2 version at the very bottom of the Top 10. That console just keeps on trucking!

The other new entry into the charts this week is in Tecmo's lady-ogling simulator, Dead or Alive: Paradise. Despite the PSP 'game' being total bunk, it's sold a respectable amount in its debut week to warrant a #9 position.
Companies: Atlus Koei Konami Nintendo SEGA Tecmo
Games: Dead or Alive: Paradise New Super Mario Bros. Wii