Fable III to Have a Ministry of Silly Walks?

Molyneux: third game to have greatest cast of any game 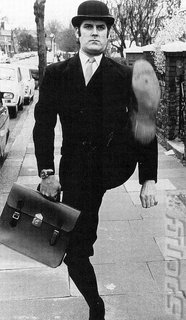 Peter Molyneux, the ever blusterous head of Lionhead Studios, reckons Fable III will have "the greatest cast that any computer game has ever had."

Heading up that cast is John Cleese - he of silly walk, dead parrot and eccentric hotel management fame - playing your butler. This is either ingenious casting or will make the title an unbearably irritating game of dodge the butler. Opinion in the SPOnG Underwater Castle remains divided.

Stephen Fry returns as Reaver, while Jonathan Ross is known to have some part to play thanks to his oopsy-daisy moment on Twitter in which he revealed Fable III's existence.

"How we're using these characters is very much dependent on how you play the game", Molyneux told IGN, "This is not like traditional dialogue ? we went into a studio with John Cleese and I think he'd never done anything like this ever before, because we had to say 'if the player is like this, how are you going to react'. It was a very interesting process."

Yes. Interesting. And as yet no news on the return of James - Gavin or Stacy or someone - Corden.
Companies: Lionhead
People: Peter Molyneux
Games: Fable III