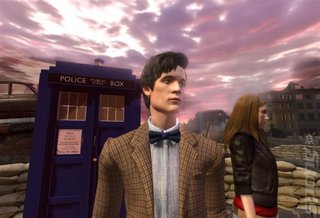 All Images (2) »
The BBC has announced that, in partnership with Sumo Digital, it is bringing four free episodic Doctor Who games to PC and Mac.

Giving a bit of a clue as to the nature of the games, the series will be called Doctor Who: The Adventure Games. Another clue is the involvement of Charles Cecil, MD of Revolution Software and creator of the Broken Sword adventure games.

It's not going to be an altogether traditional adventure game according to Cecil, however. He told Develop that, ?Generally the gameplay is driven by stealth, minigames and a little bit of object interaction. But it?s not an adventure in that you are scratching your head trying to work out how to use two abstract objects together."

The BBC has stayed closely involved with the project, with senior Beeb folk Steven Moffat, Piers Wenger, Beth Willis and Anwen Aspden serving as executive producers. Phil Ford (co-writer of Doctor Who 'Waters of Mars') and James Moran (Severance, Torchwood: Children of Earth) are on board providing stories and scripts.

Matt Smith (the new Doctor, if you reside in a big cave) and Karen Gillan (his new assistant, Amy Pond) have lent their voices (as well as likenesses) to the games.

The Beeb seems intent on making the games a serious addition to the Who universe - not just a throwaway extra - too. "There aren't 13 episodes of Doctor Who this year", said Piers Wenger, Head of Drama, BBC Wales and Executive Producer of Doctor Who. "There are 17 - four of which are interactive. Everything you see and experience within the game is part of the Doctor Who universe: we'll be taking you to places you've only ever dreamed about seeing - including locations impossible to create on television."

The announcement keeps mum on details of the games' content, refusing to give up even episode titles, stating, "The exact titles of the four episodes are being kept secret for the time being, but the four original stories will take players on a journey throughout time and space, including one location from the Doctor Who series which has never been seen before on screen. Players will encounter new and original monsters, in stories which form part of the overall Doctor Who canon."

The first episode will be available to download in June from the BBC's Doctor Who website, weighing in at 250MB. Again - for free. The BBC cannot charge for the content as part of its public service remit.

Quite what, if anything, this means for the Wii and DS Doctor Who games reported on last month remains unclear...
Companies: BBC Sumo Digital
People: Charles Cecil

Daemon 8 Apr 2010 20:29
1/1
It should have been Telltale behind this. I trust them. But I've seen too many terrible tie-in games before to have much faith in these.