Adventure on the high seas coming to a cuboid near you 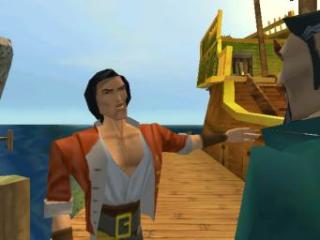 PC version
All Images (3) »
The sequel to the highly acclaimed Galleon will be coming to the Nintendo GameCube. Subtitled Islands of Mystery, the game is being developed by Confounding Factor, the studio founded by Tomb Raider creator Toby Gard.

It will be published by Digital Mayhem, a subsidiary of Interplay.

We wanted to beat what was going on in Tomb Raider in every conceivable way," stated Gard, Managing Director of Confounding Factor. "In Galleon, the characters are more fleshed-out, the animation is fluid and natural, and the puzzles are integrated into an immersive, mesmerising story?

Galleon: Islands of Mystery will take place in the same fantastical world as the original and is set to feature more damsel-saving, swashbuckling and general high-seas type shenanigans.

"Galleon will take full advantage of the Nintendo GameCube's features and technology," commented Digital Mayhem's President, Jim Molitor. "Toby and his group are creating a spectacular game, both in terms of the visuals and taking the hero based action-adventure genre up several notches."

Galleon: Islands of Mystery is quite a way into development and will be released in the States this winter. It is likely that we will see it as a launch title in Europe.