Consoles will continue to dominate. 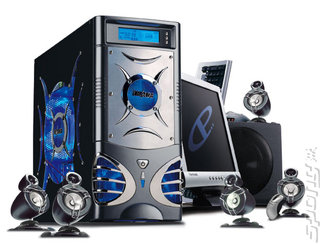 So, PC gaming then. Lot of talk about its future, what with the potential doom and gloom on one side, and the thriving indie community (and World of Warcraft) on the other.

One thing's for sure though, according to Irrational Games' Lead AI Programmer John Abercrombie - "PC gaming isn't where it was ten years ago and it's never going to be there again."

At gaming festival PAX East, a panel of PC developers were gathered to discuss the benefits of the platform, the downsides and where it could be headed in a few years time. Joining Abercrombie was Terminal Reality's Joe Kreiner and LanSlide Gaming PCs co-owner Mitchell Shuster.

The consensus - that hardware options are limiting games, and the industry needs a standard like Steam to thrive.

Says Abercrombie, "The Steam platform has done, in my mind, wonders for PC gaming. It's made a lot easier. On my work PC, I can play the games I have at home or vice versa, or getting updates, or doing matchmaking, etc. That's awesome. It's pretty much made it into a standard. Unfortunately, there are a lot of standards, other platforms than Steam, Games For Windows Live, download products like Direct2Drive and etcetera. Hopefully one of them wins out, just to say that we only have to deal with one as developers."

"There is no [PC] platform, really. It's just a mish-mosh of hardware, an operating system that kind of supports games," laments Kreiner. "The problem with that platform is, there's no standards and piracy is rampant, so why would we want to make a video game for that platform unless you had some sort of draconian DRM thing to keep it from being stolen?"

That's not to say it's all bad news. Kreiner explained that one of the advantages to PC development is in the freedom along with the relatively cheap costs. He noted that to take advantage of the market though, a studio has to specifically target a niche audience - using Torchlight on Steam as an example.

As for the future of PC gaming Abercrombie and Kreiner agree that "what we've seen in the past five years" will continue to happen, and that publishers will have an even heavier focus on consoles. "What you're also going to continue to see is a lot of indie games on PC, who are pushing the envelope in one direction or the other, and those are both great approaches to PC," Abercrombie said. "I'm glad they're doing it, [if they didn't] you wouldn't have much else than World of Warcraft."

Tone 6 Apr 2010 20:49
1/1
steazm is a fantastic platform and i use it loads, its got a community and chat systems and all your games are availabel at any pc (as long as you download them onto that unit) i have my steam account on 2 computers; one at home and one at my mates so we can play lan. never heard much about the otehr platforms but i hope steam wins and becomes teh standard. You can do a lot more on teh pc at a lower cost and if we had steam as teh base unit for it all, then piracy could be cut completely. I understand why publishers dont like teh pc market but i wish tehy would take advantage of it; in teh long run it is far cheaper than teh comsoles both for users and publishers.
Posting of new comments is now locked for this page.