Embrace the next generation of tea-bagging. 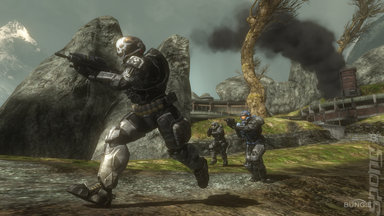 Bungie has revealed that an awful lot of the planned sandbox features will be present in the upcoming Halo: Reach multiplayer Beta, due to kick off on the 3rd May.

Along with the usual deathmatching that you know and love from past Halo games, the Beta will give participants a sneak peek into some new weapons, gameplay mechanics and defence failsafes. Among the changes, the Battle Rifle has been nixed in favour of a new Designated Marksman Rifle that rewards accuracy and skill.

You'll also be able to play with the new Focus Rifle, a Covenant weapon that works like a "long-range suppression" tool rather than a one-hit kill sniper rifle. Sandbox design lead Sage Merrill, designer Josh Hamrick and community manager Brian Jarrard spoke to GameInformer about the as-yet unrevealed weapon.

"We didn?t want to make just another sniper rifle, but we did want to fulfill that type of role so we made the focus rifle that utilizes a slightly different, ?tracking? skillset," noted Merrill. "It?s not an instant kill weapon, it does significant damage, but you need to hold it on your opponent for approximately one and a half seconds to kill them."

On top of new weapons, Beta testers will have access to a Sprint to allow you to dash out of - or towards - danger, while the Armour Lock works like a Bubble Shield in that it gives you a break from anyone attacking you. You can't move, but you'll be able to bounce enemies and weaponry off of you for a split second using an EMP blast.

Assassinations are also included in the Beta, which Merrill describes as "basically 'corpse humping 2.0.' There?s no real gameplay reason other than embarrassment to your opponent to use them."