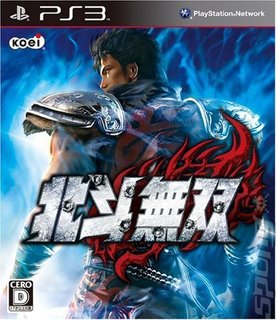 Never underestimate the power of the Fist of the North Star ? Koei's licensed Dynasty Warriors-esque game smashes all contenders and makes them explode into tiny bits as it claims the top of the Japanese Software Charts (22nd - 28th March 2010, courtesy Media Create). It highlights a pretty good run for PlayStation 3 software this week.

While Yakuza 4 settles for second place, it still manages to sell well, while Sony's own God of War III debuts at #6. God of War Collection, published by Capcom in Japan, reached #13 last week, but it seems like many were waiting for Kratos' latest instead.

Wii Fit Plus drops towards the bottom of the Top 10, despite maintaining sales ? the call of Spring appears to have ignited some bigger spending by the Japanese public. Fist of the North Star will do that to you we guess. The Xbox 360 version of Fist of the North Star: Warriors also charts at #7 this week.
Companies: Koei Namco Bandai Nintendo SCEJ SEGA
Games: God of War III New Super Mario Bros. Wii Wii Fit Plus